Aficionados of this website will notice that there was a missing monkey from the Xmas bash.

Ian, sometime commander of Monkey ship GBBMB was away on duties in the South Atlantic.

Ian and non-commissioned Monkeys: but part owners of GMB David and Paul had got a ride with

and Wide-awake Air force base on the Ascension islands.

with the RAF was just too compelling. For Ian who is a VC10 treckie the thought of a trip on one

of these beautiful old beasts was just too much. And we had the promise of the Hire of a C172!

However flying with the RAF is not like flying scheduled, you fly to RAF rules.....

we checked in at RAF Brize. 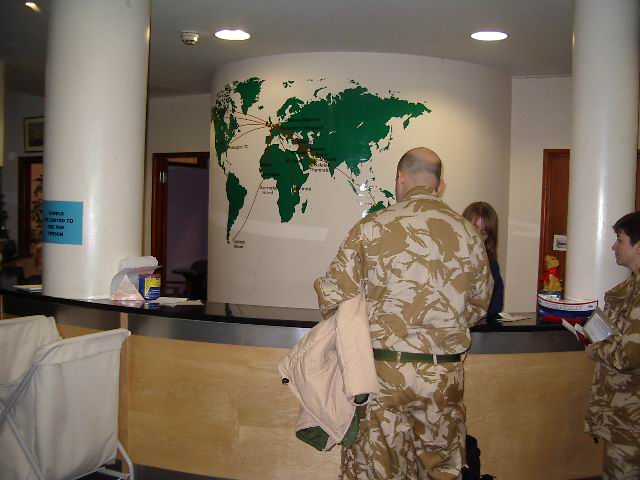 As it turned out the flight was not on a VC10, but no problem a RAF Tri-Star will do. 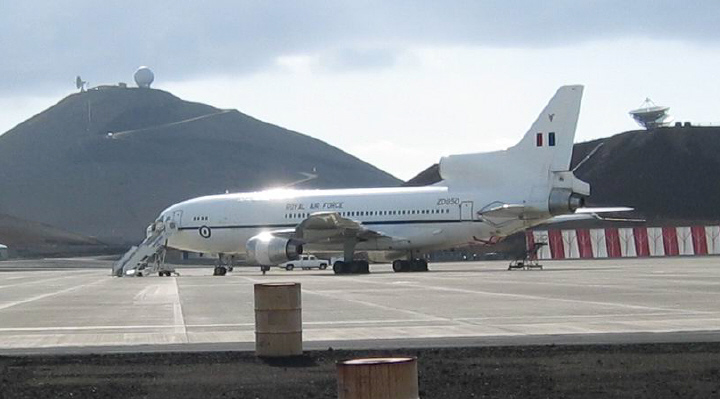 Then again this is the RAF and after checking in at Brize and for the first time coming into contact with service personnel,

some of whom were off to Basra, we sampled the delights of the NAFFI (3 pints of Kronenbourg for £3.30).

At 01.30hours we were informed by the flight sergeant that our flight was now cancelled for 24 hours due to the late arrival

of an air force C130 with a complement of squaddies stranded in Belfast who were booked on our flight.

24 hours later and after a stay in The Gateway House (a sort of Hotel but really a barracks), we were off! 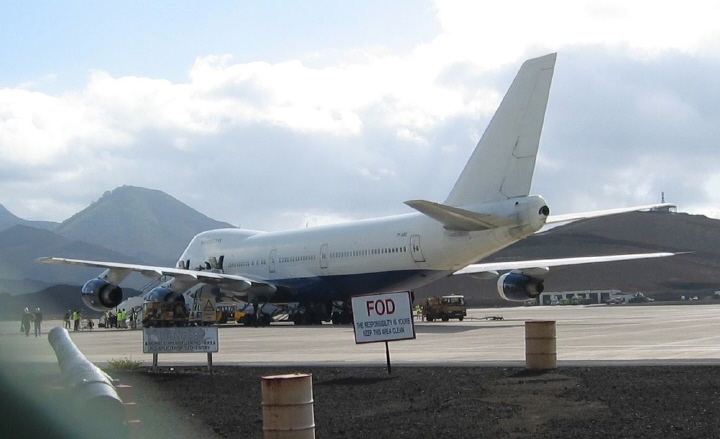 but she did take off eventually from RAF Fairford (as the Brize runway was being re surfaced).  VP-ARG makes 6 trips a

month and is charted by the Ministry of Defence & the Falklands Islands Government from Icelandic Air Atlanta, but with

British civvy crews. She has been modified for her role; her rear passenger section is fitted out as a medi-vac aircraft.

So now time to sample the delights of RAF catering, not quite the haut cuisine we were used to, 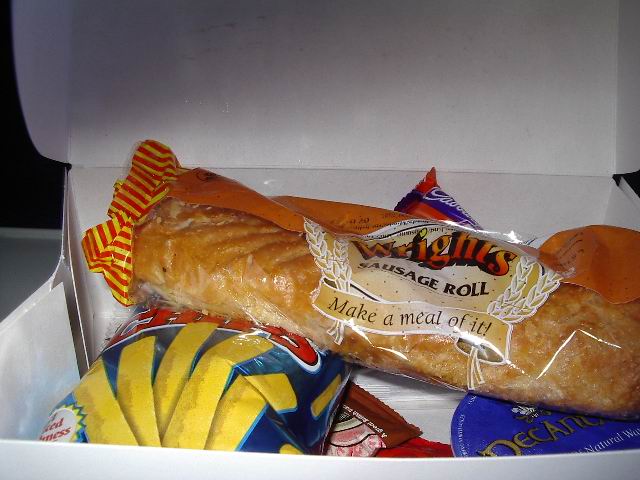 After 8 hours we crossed the equator and landed in the middle of knowhere,

the RAF/USAF base on the Ascension islands.

We had to disembark as VP-ARG was refuelled, but we did get our passports stamped  Ascension islands.

The next 7 hours down to the Falklands was boring as the pa system had failed and the movies ended up silent,

but what a treat... just before we landed the captain told us to look out to the left to catch a view of our greeters,

we were intercepted by 2 RAF Tornados who check all in coming flights despite their call signs, 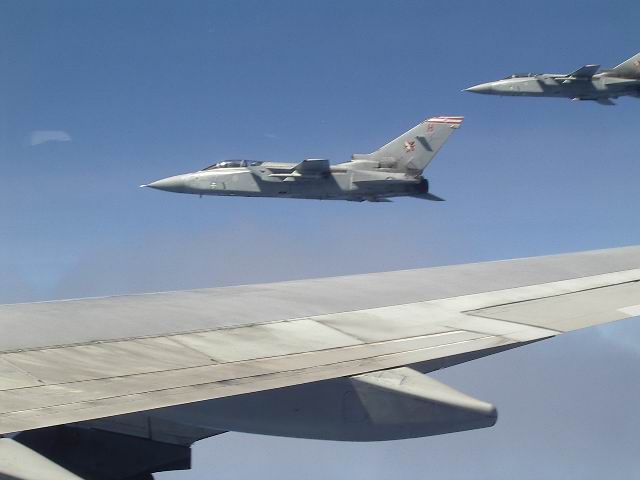 After that a rather interesting landing at RAF Mount pleasant Air base. 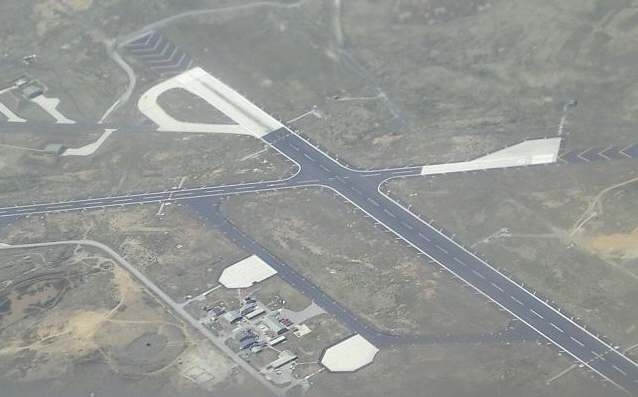 It is in fact the size of Wales and a bit more!. The trip to Port Stanley is 35 miles and the road is somewhat crude,

mainly a concrete base with gravel on top, so 4 wheel drives are the way to travel.

However on the way in to Stanley youre never far from Argentinean minefields, so heed these signs! 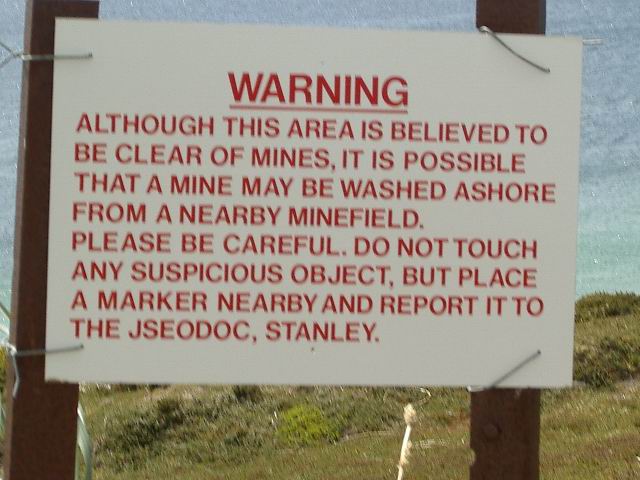 An hour later we arrived at our hotel the famous Upland Goose hotel. 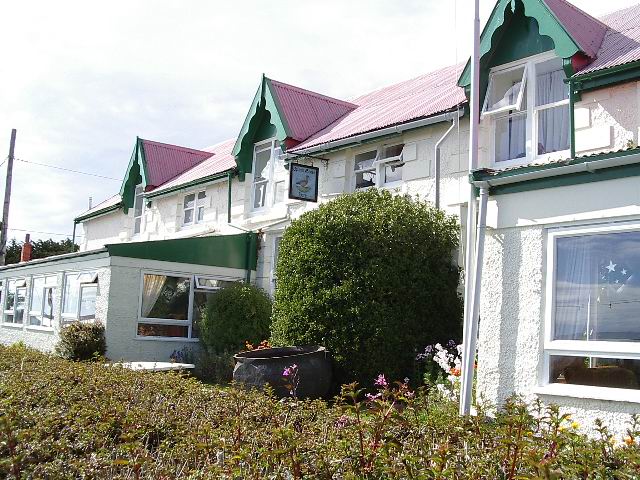 We had hoped to hire a Falklands Island reg C172, but this did not materialise. All we could do is look forlornly

through the fence at Port Stanley Airport, but no worries....we were set to have a trip with FIGAS

the Falkland Islands air services, but again this flopped leaving us very disappointed and very mucked about.

was ever used in action. Port Stanley Airport is still in use but runway 36 looks a little short even for a DR400! 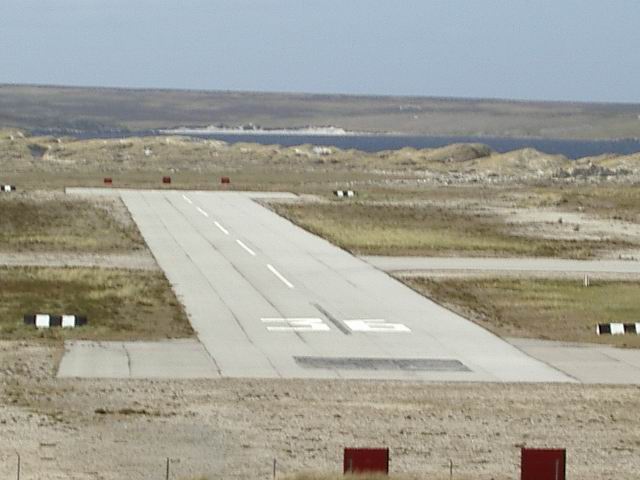 So we met Patrick Watt (our guide). Patrick was the radio announcer as the Argentineans invaded, he transmitted

instructions to the Islanders from the governor - by disregarding his own safety he ended up with a pistol to his head!

Patrick retired from Falklands radio a few years ago;

he now gives personalised tours of the war sites and wildlife sanctuaries. 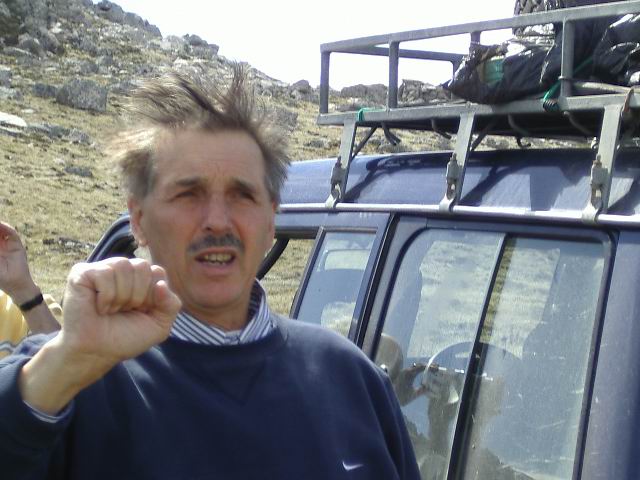 Patrick took us to all the major battlefield sites; our first visit was to San Carlos and the British military cemetery. 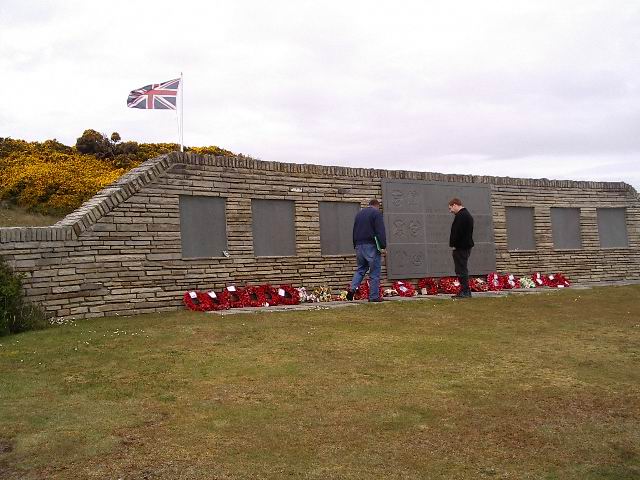 We all found this very moving - Patrick had brought the war to life.

I think we all marvelled at the bravery of our troops. To add to this was the enormous physical effort of yomping

the 80 miles from Goose Green to Port Stanley in the winter and at night with a full military pack on your back.

Patrick also told us that it was no push over and a lot of Argentineans fought courageously too.

We visited an excellent museum at San Carlos and moved on to Goose Green. 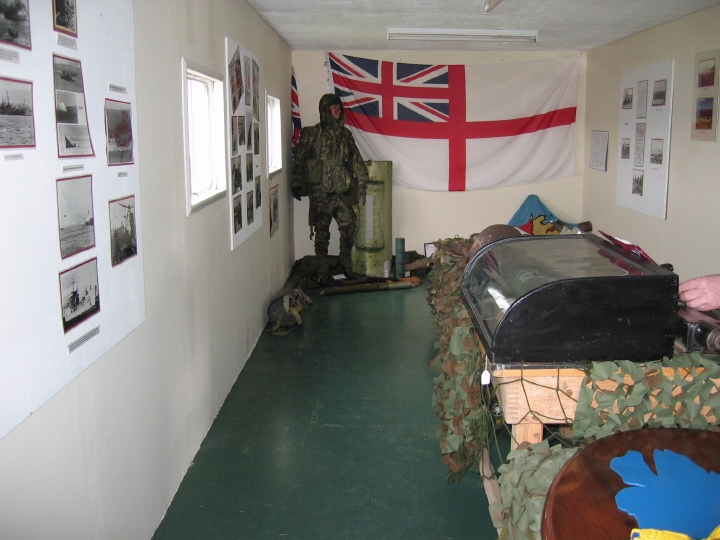 We felt it right to visit the Argentinean cemetery and their war memorial.

Again Patrick told us of the long political battle to get this finished. In fact it was only completed in 1999 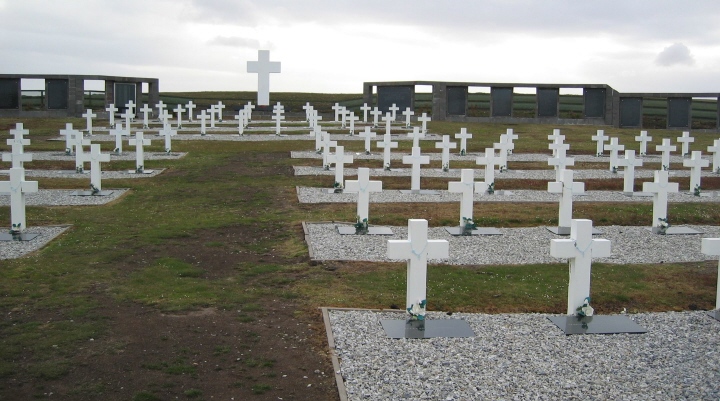 Patrick then took us on war walks, not just to the famous battles sites...he made us yomp the mountains end to end.

.....after all of this Ian thought he needed a hip replacement! 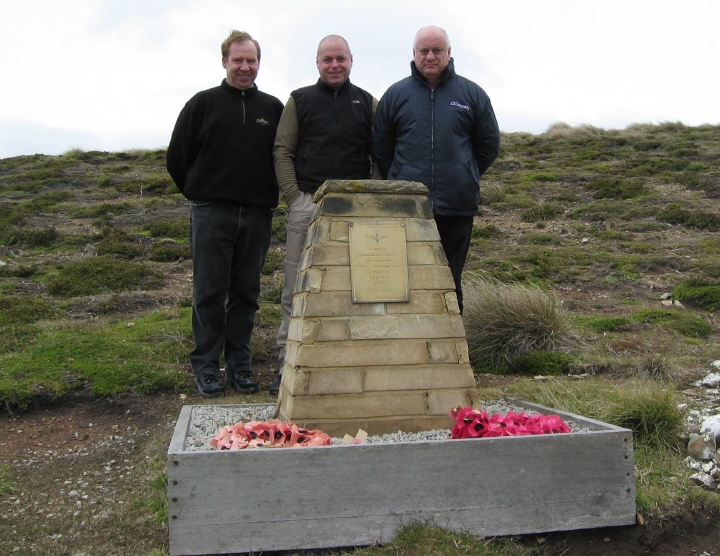 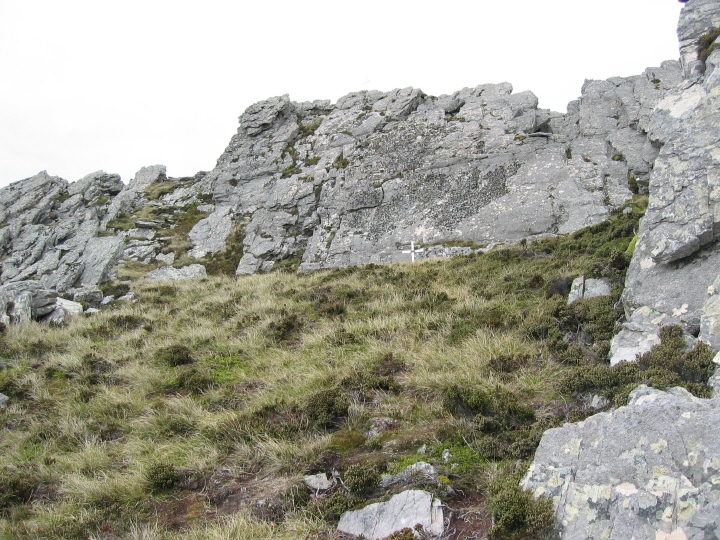 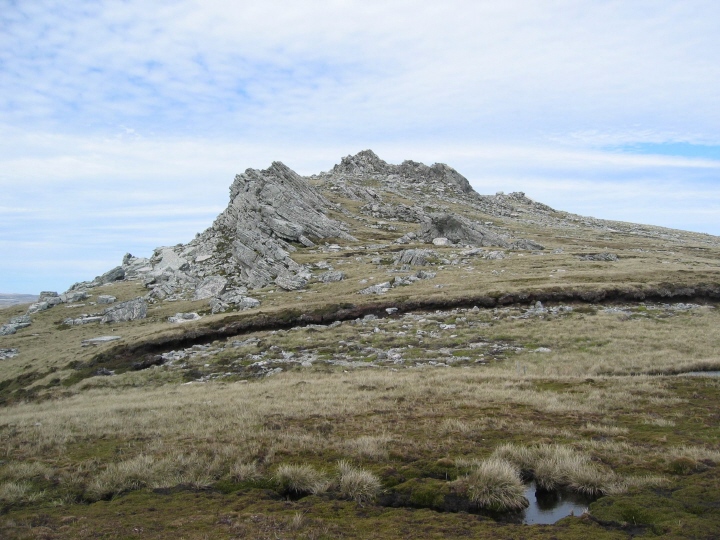 You can see the relief on Ians face (note the monkey shirt) after the final yomp. 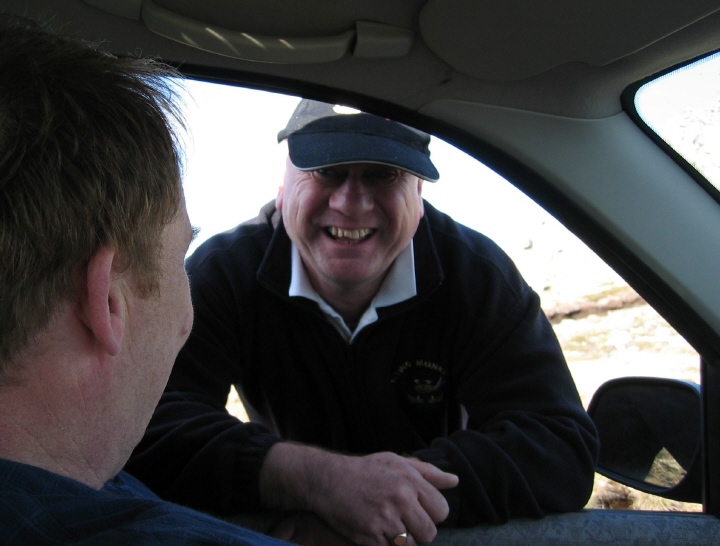 In between yomping, Patrick took us to many crashed aircraft sites, usually driving off road for hours at a time and on

the second day, we followed on in our trusty very old Freelander ....ooh errr. 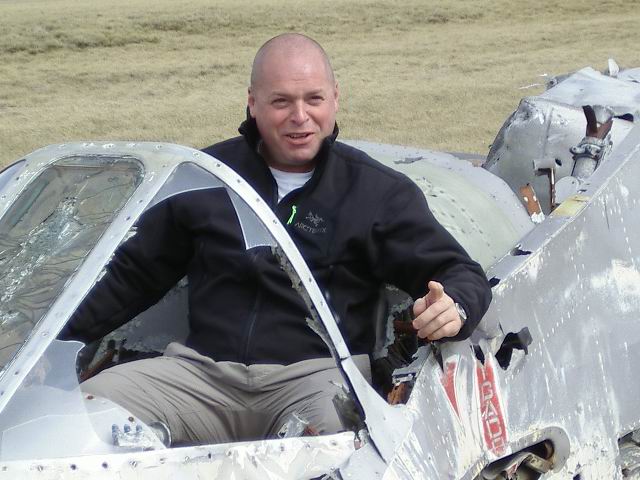 Paul in the 'downed' Argie Puccara

We found a downed RAF Harrier, looking as if it crashed yesterday and a downed Argie Puma, and Chinnook. 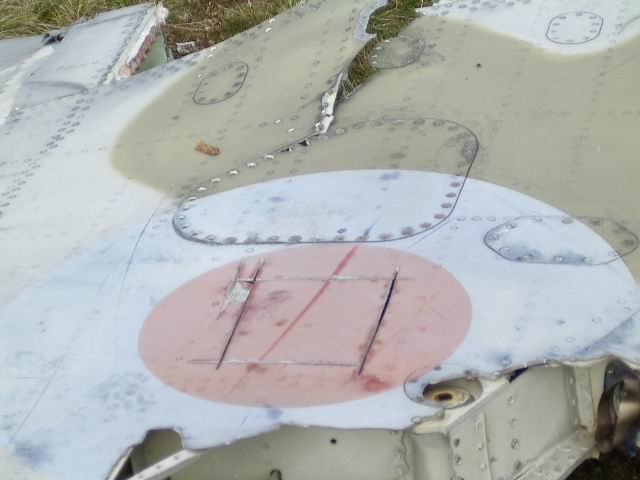 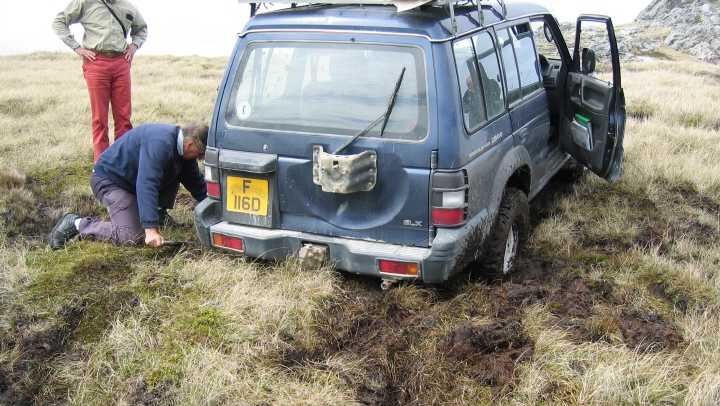 Not so our trusty old freelander, but we didnt notice the big sign on the dash board oopps.

There are just too many photos, these are just a few.

Going to the Falklands and flying with the RAF was an unforgettable experience.

We came back with new thoughts and reasons for why we went to war and why we still need to fly the flag.

So back to Mount Pleasant and its magnificent Phantom gate guardian 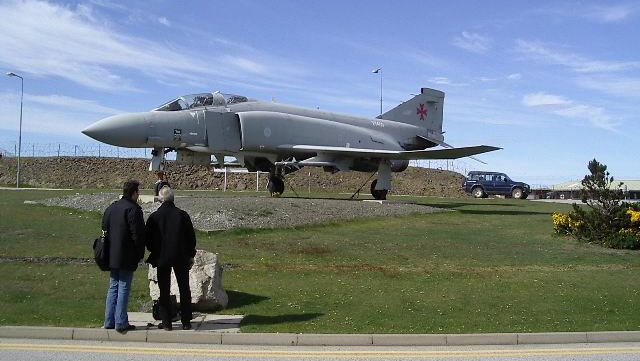 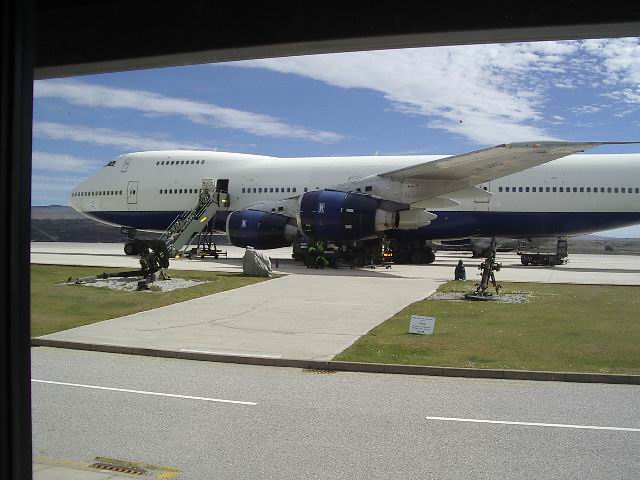 Then the long trip home via Ascension and RAF Fairford 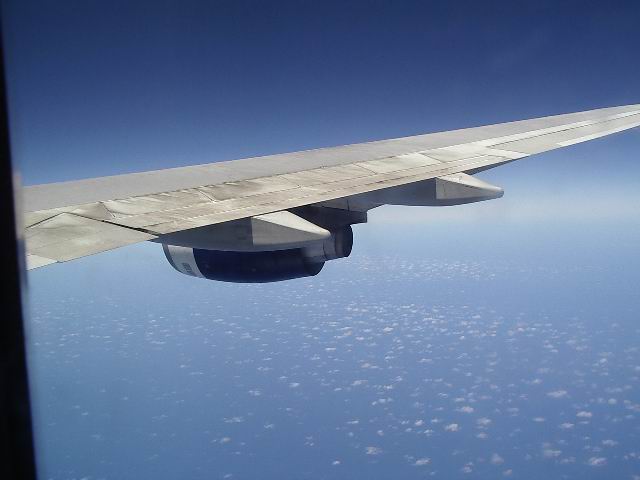 We will never forget Patrick and we thank him for all his knowledge and stories.

Also the staff of the Upland Goose for looking after us and in particular the chef for our very special curry.

You too could follow us check out Falkland Island Toursim