Courchevel is best know as a winter snow skiing holiday resort and is located just past Chambery in the french Alps.

Mitch, Paul & Rob have all had some flying training at Courchevel, so were eager to attend the anniversary fly-in.

Planning started for the trip on Thursday evening at 'HQ'. It was soon decided that G-KIMK & G-BEBN would fly there, but as Thurrock is a very private airstrip (not wanting to annoy the neighbours) they would have to relocate to Southend on Friday evening for a 06:00 departure to Chambery........the mission began!

Four cars - Two aeroplanes & Six crew all had to be in the right place at the right time!

With all that worked out & everything in place, Mitch, Kim, John, James, Paul & Rob all turned up

G-MK being faster than G-BN was on a mission to get to Chambery at 10:00, re-fuel & depart to Courchevel, land & drop off Kim & James, get instructor Jean Juvin on board & fly back to Chambery where G-BN with Paul & Rob would be waiting. Jean got in to G-BN & done a refresher course with Rob on flying into Courchevel. As Courchevel is located on the side of a mountain 6580ft in the air you need a training course to land there. You can do the standard 'permission to return at least once every Six months' course or a full blown mountain rating which allows you to use the altiport any time. More than Six months had past since Paul & Rob had done their course so needed an instructor to sit with them to fly in. So with all this done in the time scale, both aeroplanes & crew arrived in Courchevel in time for the celebration lunch with the staff, family & all the other people that had flown in. 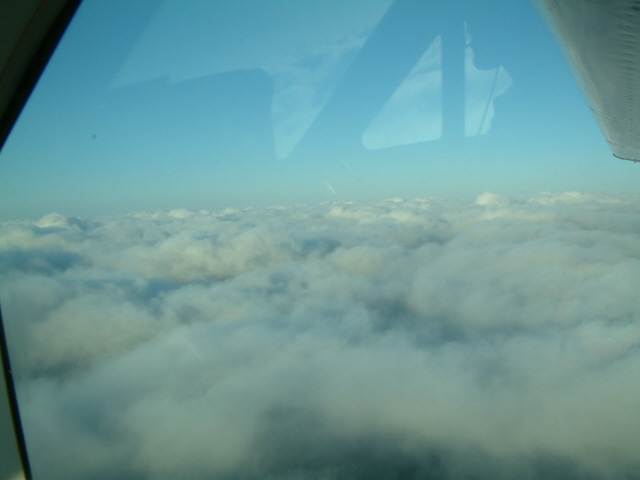 Departing Southend was clear skies, approaching Kent was getting cloudy. 'VFR on Top' ! 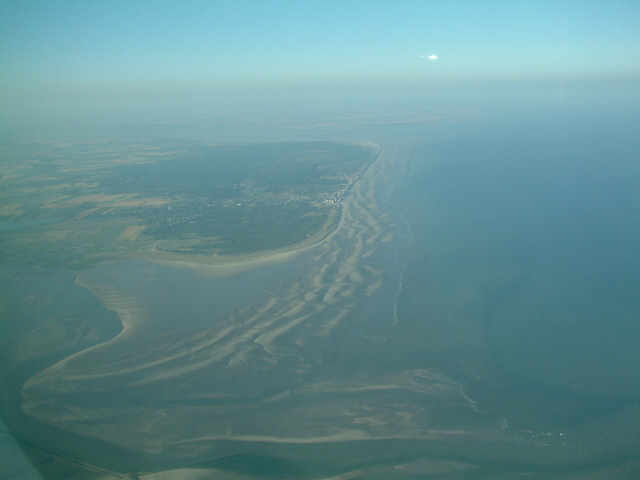 Coasting in over Abbeville, the cloud had cleared completely & remained like this for the rest of the journey.

Once in to french airspace there are not many people to talk to. As it was quite early still, there

was no other traffic around so you just need to report at turning points to the relevant station as required. 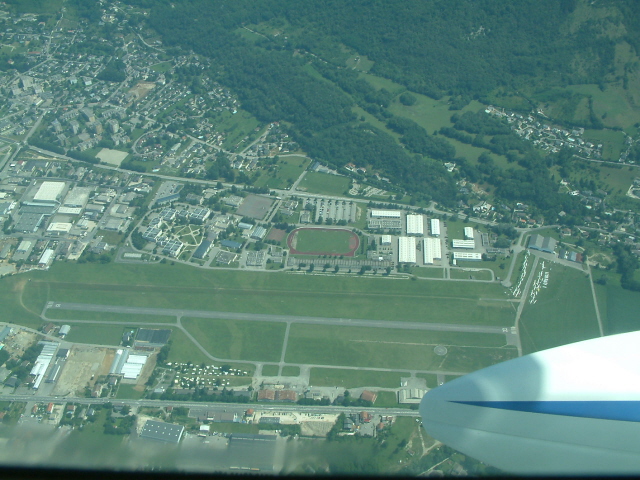 Joining Downwind for runway 36 at Chambery. Chambery is an International airport with Jets

operating from there, but it isn't very busy & only cost 10 Euros to land! 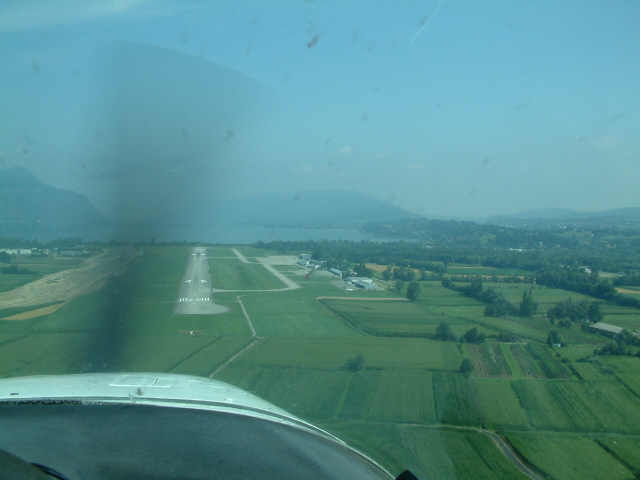 On final approach for 36. Chambery is quite easy to find because there is a massive lake at the end

of it called 'Lac du Bourget'. G-MK had fuelled & departed for Courchevel. 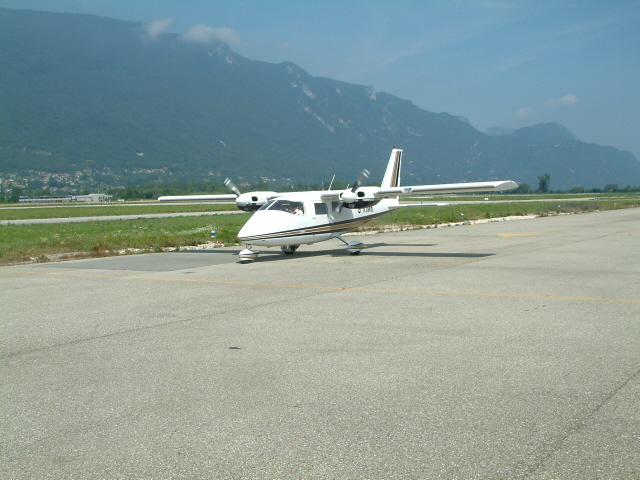 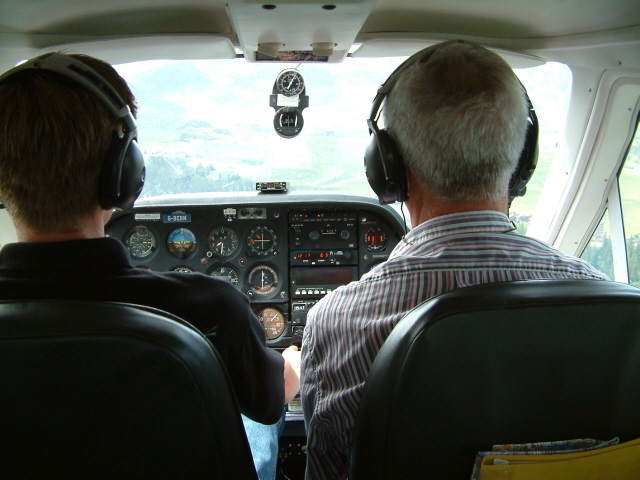 After a briefing on the ground Rob, Jean & Paul take off for Courchevel. 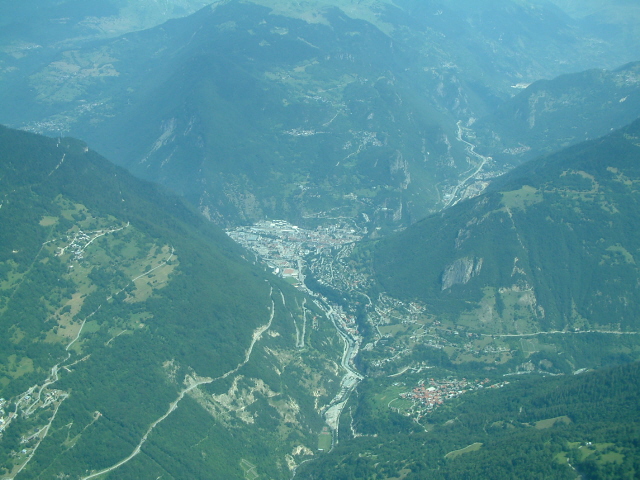 At 7500ft to climb the mountains & follow the valley's into Courchevel. 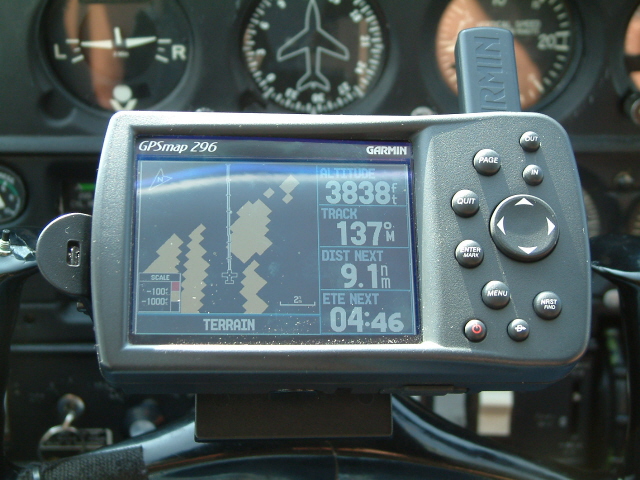 Keeping a good look at the terrain page on the GPS as Jean navigates G-BN through a valley! 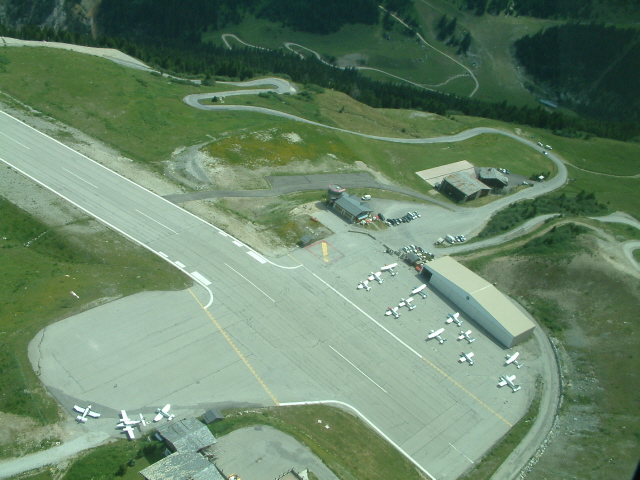 Overhead Courchevel. There is a special approach procedure when the control tower is not operating. The circuit is entered at 'Whiskey point', turn on to a heading of 125degrees & fly level with the ski lift station of 'La Loze', reset the altimeter to 7200ft & fly through the overhead to check the area then fly outbound of the runway & turn left before hitting the mountain opposite! Out to 'November point', descend to 7000ft & turn on to base leg. The plane is then set up in the normal landing configuration but attention to height, rate of descent & speed are critical. The aiming point is slightly below the beginning of the runway & when level a good 'flare' puts the plane at the correct attitude to land then full power to climb the mountain & stop at the top! A 'go around' is not an option at this airfield, there is a huge mountain at the end of the runway! 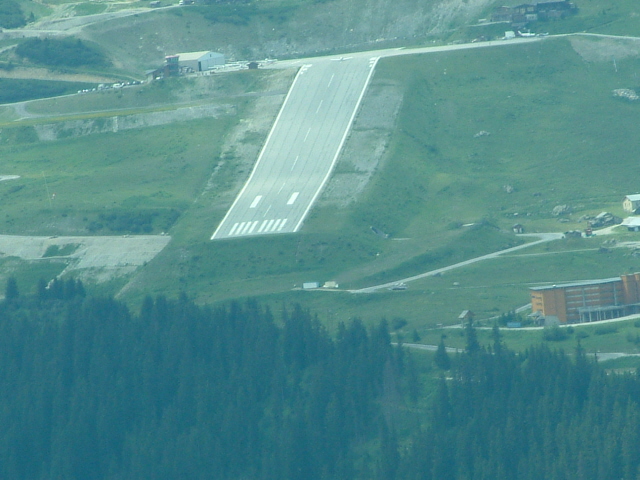 Landing here is a great experience!

After the wheels touch down, full power is required to pull the plane up to the top to the apron! 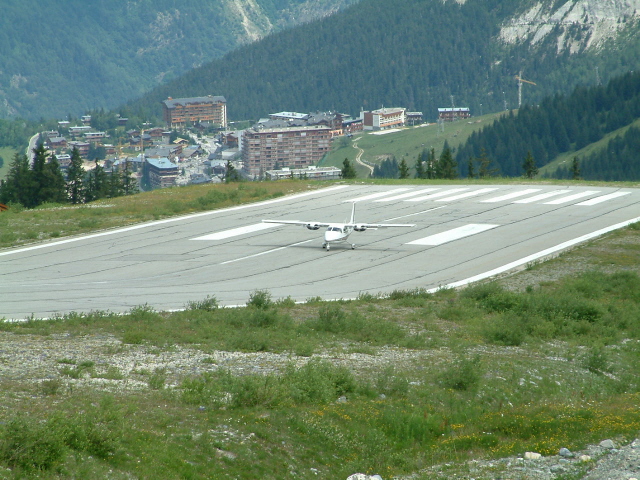 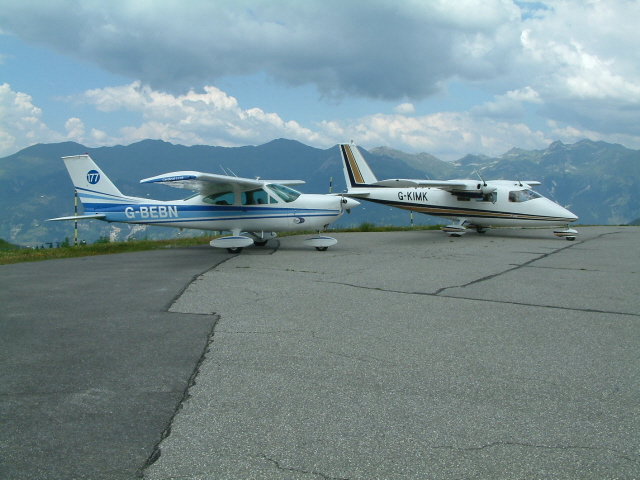 Both aeroplanes safe on the top of the mountain! (parking brake & wheel chocks applied) 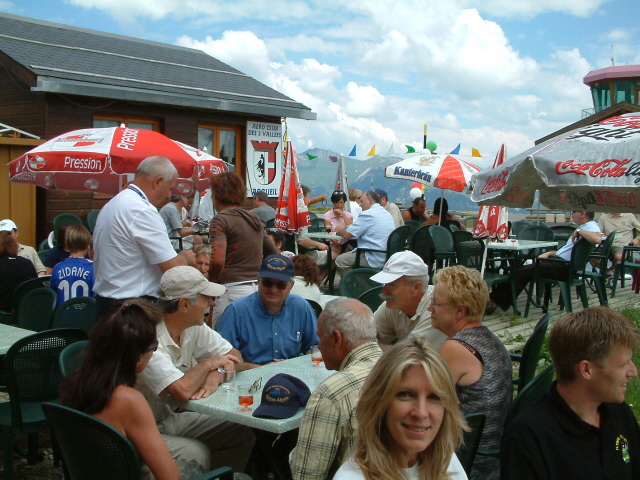 After a couple of speeches & congratulations there was a great buffet style lunch & drinks. 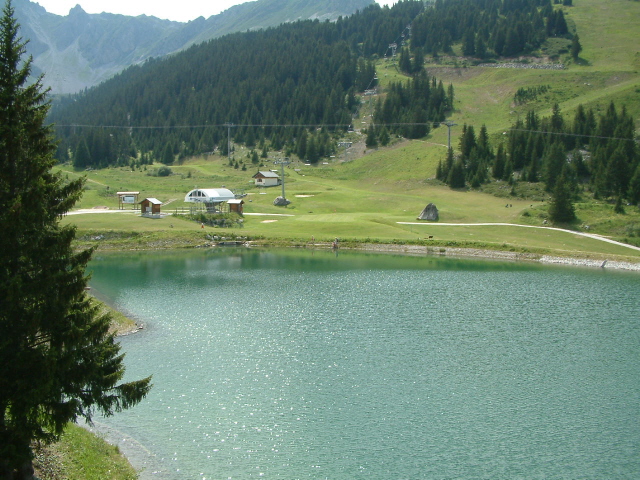 The view from the hotel room. After lunch it was off to the hotel then into town for drinks!

Everyone got together later in the evening for an evening meal at the hotel. 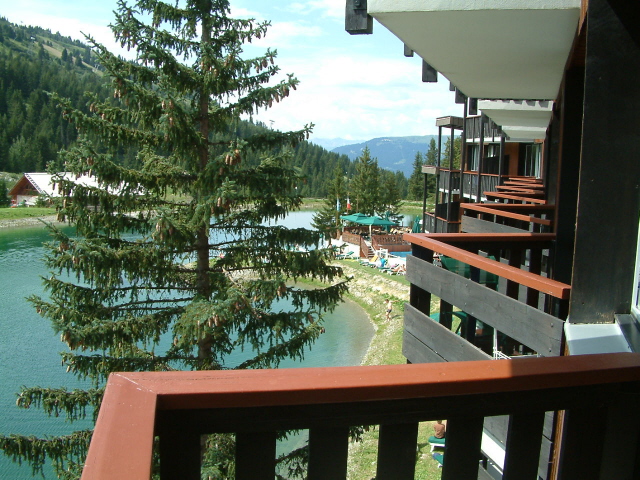 The view was just as nice in the morning too! After breakfast it was back to the altiport so Rob could do a

couple of circuits with Robert & get signed off to return to Courchevel within Six months. 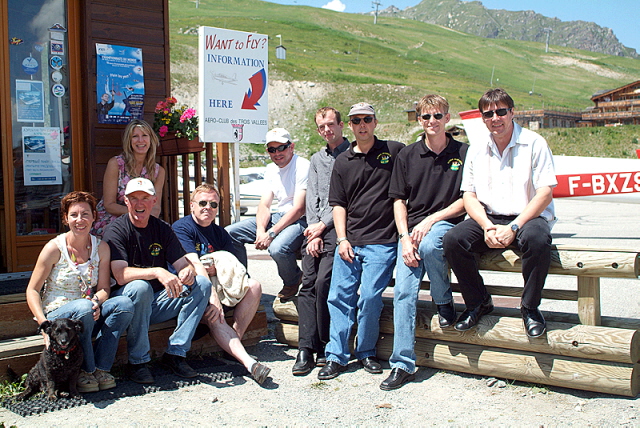 The Monkeys at Courchevel! 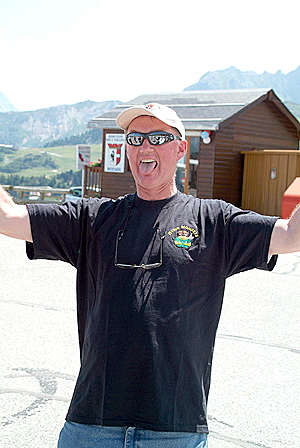 With all this completed it was time to say thank you to Robert Christin, family & friends that had all made us so very welcome & head off to Chambery to refuel & then the Four hour flight back to Southend & then Thurrock.

Another fantastic weekend thanks to 'Aero Club Des Trois Vallees'.

To arrange a visit to Courchevel Robert Christin can be contacted by email : [email protected]

Jean Juvin can be contacted by email: [email protected]